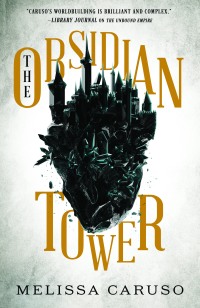 The mages of Vaskandar have the power to give life to their land and to their kingdoms. Ryxander of Gloamingard is cursed with broken magic that takes life and destroys all that she touches. In order to save her kingdom from an unfathomable threat, Ryx must use her weakness to her advantage whilst holding off a cavalcade of determined interlopers.

I had a really fun time with this book. Each page crackles with magic. Caruso’s writing flows well and moves the narrative forward at a swift pace with a steady stream of action and court intrigue throughout. The world of Eruvia is nicely fleshed out, as well. It helps that Caruso has already written a trilogy in this setting, but she lays out the conflicts, local histories, and magic systems in a clear and digestible way for a new reader.

Ryx is a worthy protagonist with very obvious flaws to overcome. Her humanity and search for connection keep her relatable and easy to root for. While the book’s ending does not offer much closure, there’s enough magic in the pages of The Obsidian Tower to bring me back for book number two.

My thanks to NetGalley and the publisher for an advanced reader copy in exchange for an honest review.

And thus ends my three-week long journey with The Fionavar Tapestry, a solid if unspectacular series.

Kay’s story itself is undeniably epic and this book features satisfying conclusions to each of the story threads, but throughout the second and third books I found myself scanning paragraphs for plot progression rather than hanging on every word of a page, which is a clue to myself that I’m ultimately disengaged from the proceedings. The Arthurian elements that were introduced in the second book never quite landed for me, but I appreciate Kay’s attempts to overlay several different mythologies onto his story.

Although this trilogy won’t become one of my favorites, I’m very interested to see the television adaptation of this series, as well as continuing to read through Kay’s other works.

After really enjoying the first book in the series, I thought this second book had a major drop-off in quality. The story went in several head-scratching directions that left me disengaged and confused. I’m hopeful that this can be explained away as “middlebookinitis” and that the third book can recapture the magic of the first. 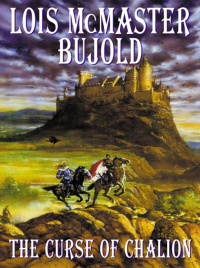 The Curse of Chalion is beautifully written high fantasy novel with court intrigue, an interesting religious structure, and a varied cast of likable characters. The story follows a former castillar named Cazaril who attempts to put his life back together after being wronged by a rival. Cazaril is incredibly easy to root for and his story arc is very satisfying.

This book has done a nice job of filling the Robin Hobb-less void in my life and I look forward to reading the other novels and novellas set in this world.

Last year I tackled Robin Hobb’s Realm of the Elderlings series in its entirety — this year (and probably into next year) I’m hoping to conquer The Wheel of Time. I’ve been following the new Tor.com readalong to supplement the experience, so we’ll see how it goes.

I can understand why this is such a popular series. There is a Tolkien-esque level of epic storytelling and worldbuilding that made for a familiar and pleasant reading experience.  There are countless parallels to The Lord of the Rings that continuously hit you over the head, so I hope Jordan branches out and sets his own course in future books.

My major issue with this first installment was the pacing. This book moves slooowwwly. Every incremental movement of the adventurers across the map feels earned and as laborious as it must have been for the characters. This is not always the case in quest novels, so I respected that element, but was still frustrated with how it hindered the swiftness of the narrative. I look forward to seeing where the overall story leads, but this first book felt too hung up on the nitty gritty details.

The hype surrounding Oathbringer was deafening in the fantasy community in anticipation of its 2017 release. I’ve read most of Sanderson’s work and am fascinated by his massive Cosmere universe. That said, Oathbringer was mostly a letdown. I enjoyed The Way of Kings and Words of Radiance, but just felt a total disconnect when it came to this book.

The most frustrating part is that I can’t quite put my finger on why I disliked it so much compared to the previous books. Was it too long? Was it unfocused? Was it too uneven? Did it spend the most time with the characters that I like the least? Did the scope expand too much? Do I have Sanderson fatigue? Or was I just in the wrong headspace to connect with this massive tome? Perhaps it was a combination of all of these issues. Either way, I could not become invested in this story until after the 1,000th page, and by that point, the strong ending could not salvage everything that had come before it [Although it did keep this book out of the 2-star range].

I won’t abandon this series yet, as I’m still intrigued by Sanderson’s world and concept, but if there isn’t some sort of story/character shakeup in the near future, my reading experience of future installments will continue to be a trudge rather than a sprint.

Brandon Sanderson’s follow-up to The Way of Kings (see review) is an ambitious and impressive display of epic fantasy storytelling. This is an expansive and detailed world that keeps growing with each additional book. Speaking of growing, this 1,000+ page monstrosity would certainly benefit from a tighter edit, but at this point Sanderson can publish whatever and however many words he chooses. Luckily, the story moves along at a decent pace, and I was never left bored with the book as it progressed, but it did take several hundred pages for the story to grab me.

The story features characters in a Good vs. Evil struggle, and almost all of them want to be on the Good side, but some attempt to better the world through Evil means. This adds an interesting wrinkle to a classic trope. While I’ve enjoyed following the heroic journeys that many of these characters are on, it seems that they lack the depth or authenticity that would allow me to truly care about them. I think I was spoiled by reading so much Robin Hobb in between books in this series.

My qualms aside, this is another enjoyable installment in an epic series that I’m excited to move forward with.

I fear that I may never again read such a wonderful series. Robin Hobb has written 16 books that are immersive, heartbreaking, and brilliantly realized. There is quite a bit of fantasy that I have yet to read, and don’t profess to be an expert in the genre by any means, but I can’t imagine finding another series that I will be as emotionally invested in as this one.

As a singular book, Assassin’s Fate functions as a proper conclusion to The Fitz & The Fool trilogy, the Liveship Traders trilogy, the Rain Wild Chronicles tetralogy, AND the Realms of the Elderlings series as a whole. There is a tremendous amount of story to tie off and Hobb does so masterfully. SO much happens in this book. It features tremendous buildup, non-stop action, and a conclusion that left me emotionally spent. This was a story of movement, progress, and rising tension. Our two POV characters set out on a collision course; the results of which were completely unpredictable. I was left guessing the entire way, with Hobb delivering surprises and her signature gut-punches to the very end.

This is a supremely satisfying finale to a series that will stick with me for my entire reading life. I hope Hobb continues with the threads of the story that she did not tie off. I would gleefully return to the world that she’s created whenever she wants to have me again.

Some extraneous thoughts on my Realms of the Elderlings reading experience: