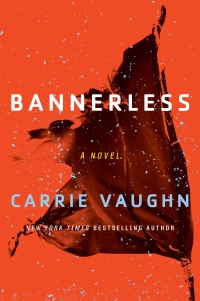 Many years after The Fall, small enclaves have built rudimentary societies that are mostly stripped of modern technologies. Small committees control the population and flow of resources by awarding banners to households that are given permission to procreate.

Author Carrie Vaughn has built an intriguing dystopian/post-apocalyptic world that leans away from the doom and gloom that one would expect in such a novel. Even with an unsolved murder as a central plot point, there is minimal violence and conflict. The plot is fairly low key, the writing is solid, but the mystery and eventual resolution are somewhat unsatisfying. I’m not sure if I’ll pick up the next book in the series, but I did have a decent time with this one.