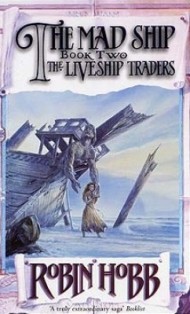 The Mad Ship continues the conquests of those we met in Ship of Magic, while adding a few new character POVs to the fold. As paths cross and fates entwine, many single POVs pair together and the narration becomes more cohesive. Nevertheless, this is much less a complete tale as it is a continuation from book #1 — and with no definitive ending, I suspect book #3 will follow the same path. In many ways this trilogy is one loooong book, sliced into three parts.

I have been burning through Robin Hobb’s work pretty steadily over the last few months, and I hit a wall with this book. As a reader, I seek fresh new journeys, but this ongoing saga progresses at such a slow pace that it was tough to stay as consistently enthralled as I was at the outset. Luckily, the quality of Hobb’s writing remains top notch and the story grabbed me back as the ending approached.

With such a heavy emphasis on character development, it’s easy to overlook how well Hobb does story revelations. She plants seeds for overarching mysteries that are very hard to solve as the reader, but when the answers are revealed they are surprising, satisfying, and they have ramifications for the overall Realms of the Elderlings world that keep me excited for each subsequent book.