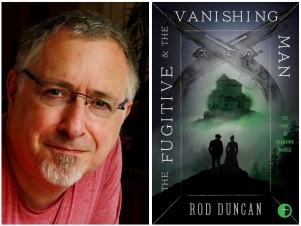 The Speculative Shelf is excited to welcome Rod Duncan to the blog today for a discussion about his upcoming book, The Fugitive and the Vanishing Man (out January 14, 2020) from Angry Robot Books. It’s the third and final book in The Map of Unknown Things series. This trilogy closes the chapter on the Elizabeth Barnabus saga, which began in Duncan’s award-winning Fall of the Gas-Lit Empire trilogy. I’ve reviewed all six of the books here on the blog and I think you’ll really enjoy this final chapter if you’ve been following this wonderful alternate history series. Many thanks to Rod for taking the time to answer my questions so thoughtfully.

Hello Rod, thank you for joining us here today! Let’s jump right in:

From a process standpoint, how much preplanning do you do when writing a series like this? When you started penning the first book, did you know how this final book would conclude?

I began writing the first book – the Bullet-Catcher’s Daughter – without much idea of what would follow. Indeed, at the very start, I thought it would be a short story. 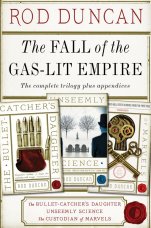 But, from your question, I’m guessing you’ve spotted various connections between book one and book six, The Fugitive and the Vanishing Man. The most obvious perhaps is the motif of Elizabeth’s pistol with the emblem of the leaping Hare inlaid in turquoise on the stock. As well as being a weapon, it is an object resonant with meaning for her, being the last gift from her father. It symbolizes that ideal of family life, which was taken from her and against which she measures her present reality.

I knew that her recollection of the past and what it meant would eventually be challenged. If you re-read the Bullet-Catcher’s Daughter, you’ll find more clues layered in. Chapter 9 begins with a quotation that mentions the switching of guns in a conjuring trick, hinting that there may be an exact replica of Elizabeth’s pistol. Twins are mentioned twice in the following pages. All this was quite deliberate.

But don’t take that to mean the series was planned out. I knew about certain plot strands and story beats. But I didn’t know the story itself. By this, I mean, I did not understand the emotions – which are the foundation of the whole thing. Elizabeth would be confronted by her past in this final book of the trilogy. But how would she feel about it – this I did not know.

Each book in The Map of Unknown Things trilogy tells a different type of story (Book 1 is a seafaring pirate tale, Book 2 a revenge story with a new character front and center, and Book 3 felt like a high fantasy novel complete with court intrigue and politics). Was it a conscious choice to mix up the styles from book to book or was that how the stories naturally unfolded?

For a long time, I have understood the thematic purpose of these three books. They were

an exploration of opposites. If the Gas-Lit Empire has too much order imposed from above, what happens in the society with too little? Elizabeth has had to contend with a society dominated by the rule of men. But what would happen if she encountered a society ruthlessly controlled by women? Elizabeth’s personal narrative has been overshadowed by the memory of her father. What would happen if a counter-narrative were introduced from her mother’s side, to challenge the things she thought she knew?

The ‘outer journey’ of these books has been a physical transition into the lands beyond the rule of order, to discover the reasons that the Gas-Lit Empire is doomed. But the ‘inner journey’ has been one of self-discovery for Elizabeth. Through these ordeals, she has understood something about her real nature. (Look at the opening sentence of the Bullet-Catcher’s Daughter and you will see that this question was there from the very outset. But I will admit that I didn’t understand it myself until the end.

Some reviewers have referred to the Gas-Lit Empire novels as dystopian. But in exploring these opposites, I’m perhaps hinting that things are not quite so simple. When a plucky band of rebels take on an evil empire, they need to carefully consider what they want in its place.

I think I have wandered off from your original question, the answer to which is, yes, I did intend each book to have different genre influences!

When I tweet out my book reviews, I add 4-5 emojis that hint at elements from that story (For instance, The Lord of the Rings might have a ring emoji 💍, a wizard 🧙🏼‍♂️, a volcano🌋, etc.). Which emojis would you select if you had to reduce your beautifully crafted novel into a few rudimentary pictograms.

Almost all writers hate having to produce a synopsis of their own novel. Reducing a hundred thousand words of carefully crafted text to a single side of A4 is harrowing. But it strikes me as an even more ingenious torture to ask a novelist to re-cast their work into emoji.

I will give you a single image, if you like. A pair of cabinets stand on a stage. Each is big enough to hold a person. But both are empty. Is there an emoji for that?

Editor’s note: There is a (filing) cabinet emoji 🗄️, which would do nothing about this book justice! 🗄️🗄️

Apart from Elizabeth Barnabus, there are several memorable characters featured in this book. If you had to write a spinoff book featuring one of your side characters who would it be and why?

Everyone is a protagonist in their own story, standing in their own spotlight. That principle guides my writing of secondary and tertiary characters.

Perhaps that’s why choosing between them is difficult. Tinker, Julia, Fabulo, John Farthing, Mary Brackenstow, Gilad – I love them all. But for a character to generate an interesting story, they need to be more than lovable. There must also be nuance, need and conflict.

Take Mary Brackenstow the idealist prisoner of conscience, for example. She may do interesting things. But I don’t think she would ever be troubled by doubt. I find it hard to imagine constructing a novel around her. Gilad on the other hand is morally ambiguous. He will be torn between self-interest and loyalty to others. An interesting story might well be supported on his young shoulders.

What is your primary emotion upon ending this saga?

My predominant emotion is anticipation. Though a few kind reviewers have had a look

at advance copies, the book is yet to be published. That’s when a book starts to have an existence beyond the writer. The audience brings it to life through the creative act of reading.

How will I feel come publication day? Six years ago, I tried to visualise a line of six books on the shelf. It seemed an impossibly ambitious goal. So I think I will allow myself to feel a sense of accomplishment. But only for about five minutes. A writer can’t afford to feel that way for long. Not if they want to push themselves to write something better.

Can you tease what project you’re working on next? Will you return to the Gas-Lit Empire world or are you charting a new frontier?

I hope there will be more of the Gas-Lit Empire. The first trilogy made a promise – that readers will see the Gas-Lit Empire come crashing down. If there’s the strength in me to do it, I will fulfil that promise.

I’d initially planned a final trilogy to finish it off. But the longer the series has gone on, the harder it’s become to balance the varying requirements of new and existing readers. If the books had become wildly successful, it would have been easier. Book shops would devote a wide shelf to displaying all the books, and I wouldn’t need to worry about new readers.

So (unless word gets round and lots more people start buying the books) I’m not going to attempt another trilogy. One book, perhaps will do it. One book to end them all?

In the meantime I’m taking a few months off to write something completely different. A new world. A new protagonist. And lots of crows.

Thank you so much for your time, Rod. I look forward to the next adventure!