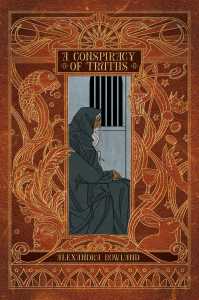 Based on the book cover and description alone, I was expecting this to be a deadly serious high fantasy tale. What greeted me instead was an unexpectedly delightful story featuring a wonderfully eccentric narrator named Chant.

Chant is an irascible traveling raconteur with a sharp tongue who tells stories to anyone who lends an ear (and some who don’t). These stories are presented as interludes interspersed throughout the book — most come from Chant’s voice, but some are tales told to him from others. Each story is complete with Chant’s internal monologue criticizing haphazard storytelling techniques or adding footnotes and flair to his own words. Chant presents as an omniscient presence who understands so much about the world but he struggles to grapple with his own emotions. He would rather believe that he’s having a heart attack than feeling excited or that his face is sweating rather than tearing up. It’s a fun personality quirk that adds some depth to what could’ve been a straightforward, one-note character.

I wasn’t consistently sucked into the overall plot nor did I always understand the court hierarchies and politics at play, but this is The Chant Show, pure and simple — the story flowed beautifully from him and out into the world.

When writing a book about a gifted storyteller, it helps to be a gifted storyteller. Luckily, author Alexandra Rowland shows a knack for spinning a charming and heartwarming yarn.  A Conspiracy of Truths is an impressive and enchanting novel that was a joy to read. I hope to read Rowland’s subsequent works and perhaps more about Chant’s past and future adventures, as well.

My thanks to Edelweiss and the publisher for an advanced reader copy in exchange for an honest review.

3 thoughts on “Review: A Conspiracy of Truths”