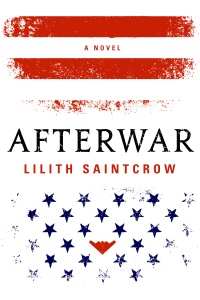 Afterwar is an uncompromising story about a motley crew of raiders who hunt down war criminals after the Second Civil War. The title is a misnomer — nothing comes after war because war never truly ends. Lilith Saintcrow’s novel explores the scars of war that live on long after a ceasefire has taken place.

There are purposeful parallels to present-day America scattered all throughout this book. Supporters of the ruling political party are dubbed “Firsters” who put “America First,” walls are being built to keep out “immies” (immigrants), and the country is run by a megalomaniac with small hands who bombs his hometown of New York City because the residents there hate him. It’s so on the nose that it became a bit of a distraction when each of these parallels appeared.

Unfortunately, I never fully engaged with the story being told, but I appreciated Saintcrow’s prose and the dark future that she presents, regardless of how upsetting (and possible) it all seems.