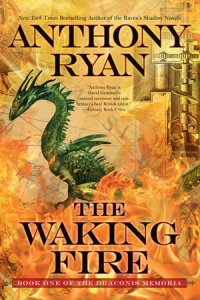 Combine the magic system of Mistborn, the gunplay of Red Dead Redemption, the steampunk aesthetic of Bioshock Infinite, the dragons of Skyrim, a fun cast, a unique culture, and an intriguing Macguffin and you have The Waking Fire. I was expecting a traditional dragon-centric Epic Fantasy story and this was that and so much more.

The story follows three character POVs who are each integral to the hunt for the mythical White drake, whose blood grants unimaginable power to those who can ingest/wield it. Along the way, the characters are thrown into bar brawls, naval battles, dragon fights, zombie horde skirmishes, and so on — frankly, the steady barrage of action sequences was a bit dizzying. I would have happily sacrificed a few of these scenes for some additional character development. With that in mind, the book feels overlong, but luckily never loses its sense of excitement. Author Anthony Ryan has built a thrilling and fascinating world that I plan on revisiting soon in the forthcoming sequel, The Legion of Flame (2017).

One thought on “Review: The Waking Fire”