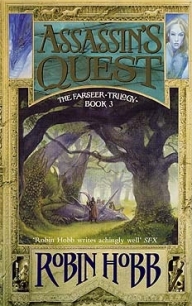 Robin Hobb writes character relationships like no one I’ve read. In Royal Assassin, the novel directly preceding this one, that skill is on full display — FitzChivalry Farseer is in a castle surrounded by his enemies, his allies, his confidants, and his lover. Fitz’s interwoven relationships with these groups made for a very satisfying level of court intrigue.  In Assassin’s Quest, Fitz casts off on his own, leaving Buckkeep behind. It reminded me of the disappointment I felt toward the end of the Harry Potter series, when Harry is no longer at Hogwarts. Harry moves from place to place, spending large chunks of time camped in the woods. It never quite feels as magical as it did back within the confines of Hogwarts.

The word “Quest” in the title is apt. Fitz journeys relentlessly. There are only so many times one can make camp, hunt, and evade capture before it becomes a trifle tiresome. Things unfold so slowly that it feels like Fitz and his companions are wading through quicksand. The events that transpire along the way are interesting enough to recover some goodwill, but it was not always a satisfying journey to me as a reader. While Royal Assassin was always propelling the reader forward toward an ending, Assassin’s Quest felt meandering and stagnant.

There is magic to be found here, however. Between the Skill and the Wit, Hobb has created two unique magic systems that are intriguing in their own right, but Fitz’s possession of both makes for a dazzling combination. The issue is that Fitz is never in full command of his abilities. In fact, no character in this story is wholly themselves. Hollowed out by grief, or the Skill, or secrets, no one is operating at 100% and the wonderfully written characters cannot shine until the final pages. That being said, the conclusion here is epic and the story is capped by a beautiful and rewarding epilogue. Despite my aforementioned misgivings, Hobb’s writing remains the beacon in the dark. Rarely have I read fiction so engrossing. Her words evoke such a clear picture in my mind as a reader that even a story with flaws can still take flight off the page.