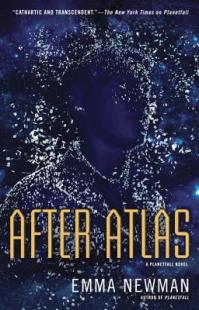 Planetfall (2015) has stuck in my mind since reading it last year. It had a haunting quality that I could not shake. After Atlas is a pseudo-sequel that takes place after the events of that novel, but exists adjacent to the original story. It certainly can function as a standalone novel, but knowing the backstory and outcome of Planetfall adds another layer to the reading experience that ended up being quite satisfying.

In the near future, technology has advanced to a point where everyone has their own virtual assistant, food comes out of printers, virtual reality is ubiquitous, and corporations (overtly) control governments. Some long for a simpler time, including those in the Circle, an anti-tech cult. When their messiah-like leader is found dead under mysterious circumstances, Carl Moreno, a detective and former Circle member, must solve the case while multiple nefarious factions attempt to stop him.

In this police procedural, let’s call it CSI: VR, author Emma Newman deftly lays out the clues and mysteries in a straightforward way, but the way the puzzle and solution come together is unexpected, yet makes perfect sense. The pieces fit together snugly and the whole is greater than the sum of its parts.

Another strength of After Atlas lies in Detective Moreno, the chief protagonist. He has so many forces acting and pulling on his psyche, from his own internal demons, to his tragic past, to his unending indentured servitude to his employer, and to unseen external forces that are conspiring against him. He is a complex hero who has a gratifying character arc.

The ending of After Atlas was final in a certain sense, but opened the possibility for a follow-up that would explore the continuation of the same story, but would switch up the genre yet again. I, for one, hope that comes to fruition. Emma Newman has emerged as an impressive voice in science fiction who writes interesting stories with depth and nuance. I look forward to seeing whatever else she cooks up in the future.

One thought on “Review: After Atlas”